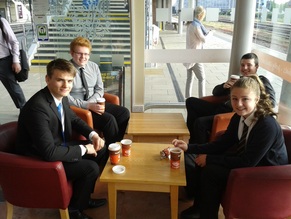 The Martlet team from Noel-Baker School
Martin Burley is an English teacher and Literacy Coordinator at Noel-Baker School. He was recently Highly Commended in the Shine School Media Awards in the Most Inspirational Teacher 2014 category. Noel-Baker's e-magazine, The Martlet, was also Highly Commended in The Best Online category.
He graduated from Derby University with a First Class Honours Degree in English & Creative Writing, but only after spending the first 16 years of his working life at Barclays Bank.
Whilst studying he worked as a freelance journalist for the Derby Telegraph as Chief Feature Writer for the Business Supplement. He then became a staff feature writer for two years on the newspaper and their award winning magazine, 'The Derbyshire Magazine'.
Martin then continued his studies at Nottingham Trent University where he gained his PGCE and moved into the Education arena.
He was born in Derby and still lives in the city with his wife and two children.
Powered by